After graduating at one of the leading catering colleges, UCB, in the UK, Stuart took up his first position in a small restaurant in his hometown of Staffordshire.

After a total of four years working with Michael Caines, Stuart was offered a job with another Michelin-starred British chef, Gordon Ramsay.

Taking up the role of Chef de Partie at the 3 Michelin starred Restaurant Gordon Ramsay in London, Stuart worked alongside a team of talented and creative chefs under the guidance of one of the best known personalities in the industry.

After five years in the US, Stuart returned to the UK and Michael Caines to take on the position of Executive Chef at the Abode Hotel, Chester.

In late 2011 and ready for a new challenge, Stuart took on a role within Doha, Qatar, where he worked across four varying hospitality projects under the ownership of Qatar Foundation, in the city’s iconic Tornado Tower.

Early 2017, Stuart returned to the UK to open his own restaurant, and in August, Docket No.33 opened in Whitchurch, Shropshire. Specialising in seasonal British produce, the main offering at the restaurant is the Tasting Menu with matched wines.

Following the success of the Whitchurch restaurant, Stuart was approached for last year’s Great British Menu.
After triumphing in his regional heat he progressed to the national finals and we loved seeing his specially created locally inspired dishes. 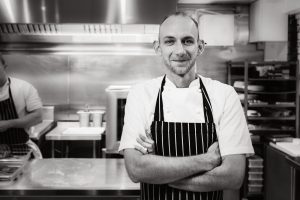