Shaun O’Neale is a world-recognized chef currently residing in Las Vegas, NV.  A former DJ, Shaun was crowned Season 7 Champion of MasterChef on FOX in 2016 and completed his first cookbook in 2017 titled “My Modern American Table”.  He is a self-taught chef who developed his upscale, modern American style of cooking by reading cookbooks and traveling the world.

Since his MasterChef win, Shaun has been traveling and performing at some of the most recognizable culinary events all over the world including working with major brands such as Disney, Macy’s and Pit Boss Grills.  As of present, he has traveled to over 61 US cities and 9 countries.

Shaun’s talents spread far beyond the entertainment world as he became Newcastle Brown Ale’s first culinary chef ambassador in 2018.  He was the only MasterChef winner to be featured on three additional seasons of the show, not including hosting the MasterChef Celebrity Showdown in 2017.  Shaun has also made appearances on Home and Family, Best in Food and starred in his own commercial for Morningstar Farms.

Shaun is the only US chef represented at the first ever MasterChef restaurant in Dubai, MasterChef the TV Experience, and has plans to open his very first restaurant in Las Vegas in the near future. 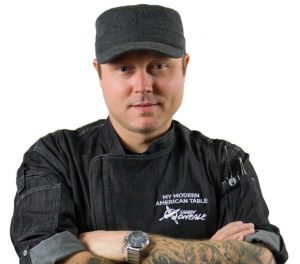