Nisha Katona is the CEO, executive chef and development chef of Mowgli Street Food restaurants and founder of the Mowgli Trust charity.

Founded in 2014, Nisha used all her savings to open the first Mowgli Street Food restaurant in the city of Liverpool. Since giving up the security of a 20 year career as a full time Barrister, Nisha has grown Mowgli Street Food to eighteen restaurants across the UK with an aim to continue growing restaurants and jobs in order to fulfil the mission of Mowgli: to enrich lives in the cites she goes to.

Mowgli Street Food is recognised as one of the nation’s fastest growing companies according to The Sunday Times Fast Track 100 and Nisha received an MBE in the 2019 New Year Honours List for services in the Food Industry.

Nisha is also the author of four cookbooks:

Nisha is currently a judge on the new series of Great British Menu on BBC Two and appears regularly on ITV’s This Morning.
She has also worked extensively as a business and food expert on several projects across the BBC, ITV and Channel 4 and Radio 4. 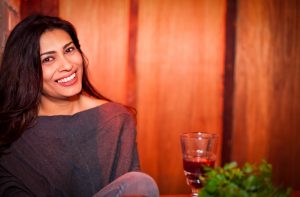