Chris is on a mission to make cooking easier and more delicious, which is why he’s been working with M&S Food to create speedy family recipes. Take a look at his latest dishes and say goodbye to that “what do I make for dinner?” dilemma.

“I’ve always loved food,” says Chris, who’s been cooking up a storm in the M&S kitchens to create some family-friendly recipes for you to enjoy. “Growing up in Hexham, Northumberland, I used to cook dinner for my mum and dad every day. I trained with Atul Kochhar at his Michelin-starred restaurant, but my real passion is inspiring others and making home cooking accessible for everyone.”

As a consultant for M&S Food, Chris creates weekly family recipes and is the face of their ‘Fresh Market Update’ TV adverts, a campaign which reaches millions of people across the UK.

With over 200,000 followers across his social media platforms, Chris gives his followers the confidence to get in the kitchen and cook his easy recipes – accompanied by some motivational music, of course. One of his proudest achievements is the ‘Chris Baber Cooking School’ which provided free cookalongs to children during lockdown.

When he’s not in the kitchen, Chris loves to keep fit and enjoys being in the great outdoors.

With huge projects in the pipeline, a lot more people are about to know Chris Baber’s name. Unstoppable in the kitchen and with an infectious energy that lights up a room, we have no doubt that Chris is a superstar in the making. 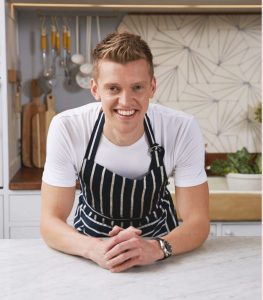